The corporate structure of the AIVD

The AIVD: Who we are 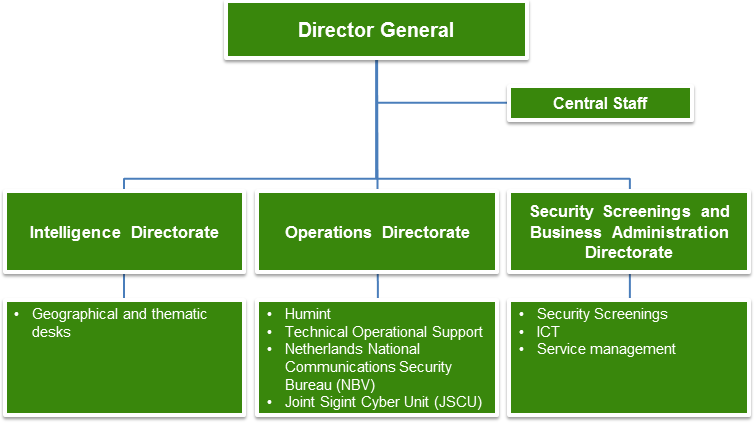 Head of the AIVD

The central staff provides the management and the organisation with advice and support on political and administrative matters, security, legal affairs, communication and control.

The Intelligence Directorate conducts investigations, provides information, and mobilises third parties to safeguard the democratic legal order and national security, to actively reduce risks, and to contribute to foreign policy-making.

The Operations Directorate carries out operational activities to support investigations on behalf of the Intelligence Directorate. The National Communications Security Agency (Nationaal Bureau voor Verbindingsbeveiliging, NBV) and the Joint Sigint Cyber Unit (JSCU) both fall under under this directorate.

A unit of the AIVD, the Netherlands National Communications Security Agency (NBV) promotes the protection of crucial government information. As a government partner and advisor, and with its unique qualities when it comes to information security, the NBV makes an active and tangible contribution to national security in the Netherlands.

In the Joint Sigint Cyber Unit (JSCU) the AIVD and MIVD have joined forces. The two services combine their expertise and resources in the field of Signals Intelligence (Sigint) and cyberactivities.

With the interception of communications the JSCU supports teams that investigate threats to the Netherlands and the armed forces. In the framework of the National Cyber Security Strategy, JSCU specialists are also helping to safeguard the internet.

This directorate is not only responsible for security screenings, but also for internal products and services as well as for information management.

This unit safeguards our national security by screening or ‘vetting' individuals who (wish to) hold a so-called position involving confidentiality, by advising designating ministers when they are compiling draft lists of such positions, and by ensuring on behalf of the Minister of the Interior and Kingdom Relations that actual designations are reasonable and proportionate.

Return to: About AIVD